A gluten free dog cake recipe is perfect for the dog who has gluten sensitivity. Celiac disease, an autoimmune illness in which the body attacks itself whenever gluten is ingested, leads to damage in the small intestine and interferes with the absorption of certain nutrients, eventually causing malnutrition. Celiac sprue, as it is known, is apparently common in Irish Setters because the breed's genetic make-up predisposes for it. But other breeds of dogs may suffer from it as well. Wheat, corn and rye are common gluten products that should be avoided in their diet.

Rice flour is considered gluten free. The flour is produced by grinding white rice into a very fine powder. It is a good substitute to use for wheat flour.

But rice flour cannot be used in baking just by itself. Other ingredients have to be combined with it to get it to produce similar results to wheat flour.

If you will do a lot of gluten-free baking for dogs, you may wish to make it easy on yourself and use a gluten-free dog cake mix. This mix is not only gluten-free, it wheat-free, corn-free, soy-free, and sugar-free. So there are no common allergens for dogs in this cake mix. 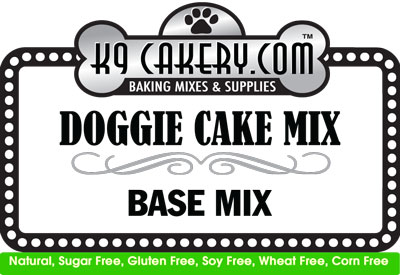 Made from rice flour, use this mix in your dog cake recipe the same as you would use wheat flour. It already contains the other ingredients necessary to use for baking. All you have to do is add an egg, oil and water in the amounts specified on the package, stir and bake.

Bake it in a bone shaped dog pan as you would any other dog birthday cake recipe.

Then, decorate with Fido's Frosting. According to the ingredients as listed, this yogurt icing mix for dogs appears to be gluten free. However, if you have concerns, it is advisable to check with your vet first by giving him or her the list of ingredients to make sure all would be fine.

Some reasons to make a cake for dogs include the following celebrations:

More Recipes for Cakes for Dogs

Sign up for our free newsletter: Homemade Dog Treat Recipes And More and get a bonus report: The Top 20 Dog Treat Flavors Dogs Are Barking For

Simplify your life with this bone shape cake pan! It makes baking easy. The silicone makes for less pre-greasing and easy cleaning in the dishwasher.